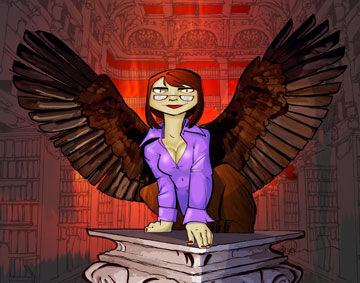 Phix is a bespectacled sphinx, Librarian of the extra-dimensional Bibliothiki. Currently she is adjusting to her new coworker Nudge and teaching Shelly about being a sphinx.

Phix put in a "no humans" rule for access to the library after humans burned the library's portal on Earth, the Library of Alexandria, which gives her an excuse to boot out troublesome intruders. Phix challenged Monica's access to the Library when Brandi brought her around, demanding the answer to a riddle with Monica's death as the penalty for a wrong answer[1]; this was later revealed as a test to see whether Monica dedication to learning the library's secrets. After Monica correctly answered the riddle, Phix gave her a copy of "Machine Before The Sunstone", which carried a picture of one of the dolls that Shelly guards on its cover. On Christmas, 2007, Phix travels to Earth's dimension and gives Monica the book permanently for safekeeping - it was written by Jin, a collection of poems that help her remember her mother's teachings. Phix then reveals secrets about Jin's mother and the Calendar Machine to Monica.

Monica later brought Shelly to the library, where Phix subjected her to the ordeal of the riddle. After Shelly gave a different (but also correct) answer, Phix gave her a small hammer whose purpose Shelly had to figure out for herself. Once Monica and Shelly departed, Phix reflected that the girls had some painful growing up to do, just as she had from the days when she really was a murderous monster[2].

The riddle of the Phix was as follows: "I've never seen your face, yet I kiss it every day. You can see me all around you, in the treetops where I play" Monica[3] and Shelly[4] each gave different answers to the riddle: "sunshine" and "the wind", respectively. Phix rewarded both of them for their responses but never actually confirmed that either answer was correct. Katherine never answered at all[5]. There are many ways of finding information in the Bibliothiki and not all of them are straightforward. But pay attention if the librarian offers you a cookie[6].

For a time she could not freely leave the Library[7], but currently she's able to visit Earth at will. She's taken advantage of this to drop in on Tina at Mucho Mocha, and to develop a relationship with Gregory Fields[8][9], Monica's boss at the museum. Phix has taken up with human men before. Visitors to the library might meet Phix, Nudge, or both - or other patrons such as Atsali or Euryale, who are pretty exotic folks themselves.