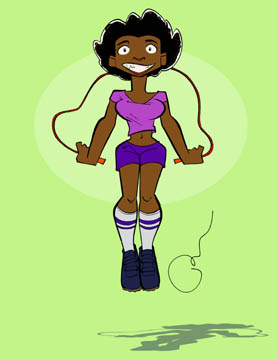 Brandilyn "Brandi" Oduya is one of the three golems that Tepoz caused to appear as drunken college girls to Monica; she's tall beautiful 18-year-old African girl.  She's living in a small apartment with Bud, a few blocks from Mucho Mocha[1].

She was part of the Chimera, a very powerful being that nearly destroyed the world, along with Bud and Jin. They are once again separate people, although also still golems: physically invulnerable, magically animated clay dolls holding the souls of technically dead women. Brandi is the one of the golem girls least likely to show her powers without need, but she does sometimes transform into a giant lioness.

She is described as adult, emotionally solid as a rock, and a mother hen. Brandi is probably the smartest in terms of raw intellect, but she does not think well under pressure and knows it[2].

She likes the movie Pretty In Pink - though none of the Golem Girls like the ending[3].

She introduced Monica to Phix and the Bibliothiki.

Brandi doesn't talk much about her past - a passing reference to "that one time at the Pyramid of the Moon," or the book she wrote that suggested how to fix the Calendar Machine with a bowling ball and mirrors. It was years before her Minneapolis friends heard about the World Grid, or that she had worked at a nursery before becoming a golem.

When she and Bud set out to get normal jobs, she was thought to be employed at a print shop in an office setting in the Twin Cities. That may be a cover for the Senior Director of the Minneapolis division of the "Men In Black".[4]

The Senior Director thing follows an old deal[5] she made long ago, and has had some interesting consequences.

Brandi is a primary cast member.